Recently, I attended the Hutan Kita exhibition at the KL Tower (beside the KL Forest Eco Park). The exhibition was meant to showcase the forest heritage of Malaysia and was opened by the Prime Minister, Dr Mahathir, on August 23, who at the ceremony also declared the National Tree of Malaysia as the Merbau tree (Intsia palembanica). In his speech, Mahathir also claimed that Malaysia had over 55% forest cover (more on that later).

The exhibition ran for about a month, and was quite ok, but could have done with more real exhibits and dioramas rather than relying on pre-programmed shows being run on small TV screens that few bothered to watch. Even some of the photos were no longer relevant; certain areas have since been heavily logged, yet displaying old photos that gave the impression that the place was still wild and untouched. 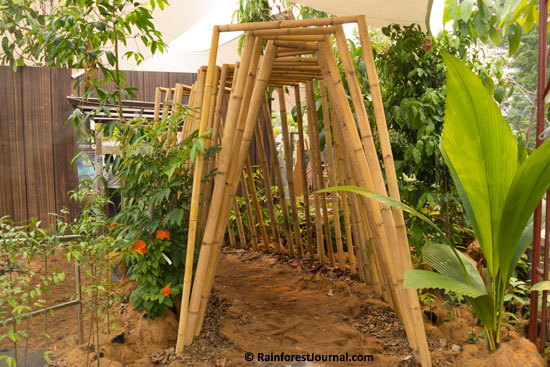 The exhibition walkway made from bamboo poles. The umbrella shaped palm beside it on the right is Johannesteijsmannia altifrons.

That said, the staff manning the booths were friendly and helpful, and I especially enjoyed the traditional dance performances by the staff of the Sabah Forestry Department booth. The dark animated room showing scenes of “Wild Malaysia” was also quite mesmerizing.

Photos of some Malaysian nature sites. The Tasik (Lake) Chini ones look outdated to me. Tasik Chini has undergone a lot of deforestation, logging, and mining over the years. Most of the forest surrounding the lake have been heavily logged.

However, for me, the exhibition was a rather sad reminder of the state of the Malaysia’s forests, although having an exhibition was I guess, better than no exhibition. The issue is the same all along – Malaysia is not doing enough to conserve its rainforests and in terms of priorities, the forests and environment are always among the last, if not the last. From what I saw, quite a sizable number of the visitors to the exhibition were not even Malaysians, but foreigners. 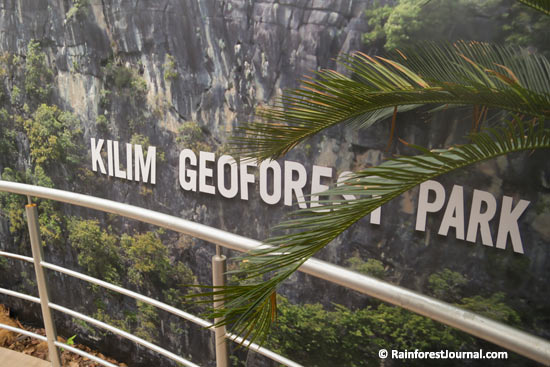 The mangrove forest exhibit. It does display mangrove saplings, but obviously, the look-and-feel is nothing like the real thing.

It was sad to see the stuffed animals on display there, which may very well soon vanish from Malaysia, such as the Malayan Tiger, the Serow, the Sunda Pangolin, and the Indochinese (Malayan) Leopard. All these animals (plus many more) are currently severely threatened by poaching and rapid deforestation. They could all be gone within 10 years from the way things are going. 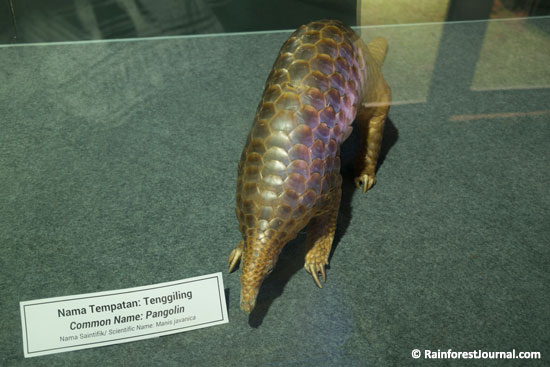 The Sunda Pangolin (Manis javanica) is the most trafficked animal on the planet now (along with other pangolin species), because of the demand for their scales from China. It has become very rare nowadays, and is on the verge of extinction. 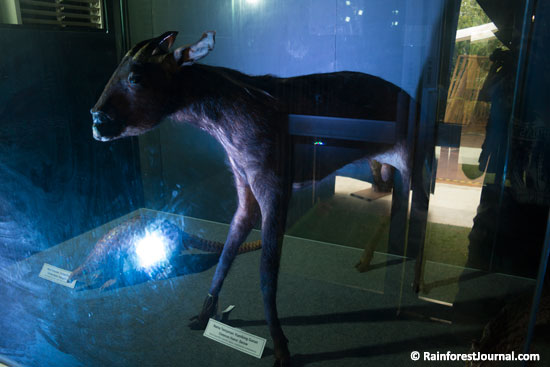 The Sumatran Serow is the Malaysian version of mountain goat and almost never sighted, due to their elusive nature. 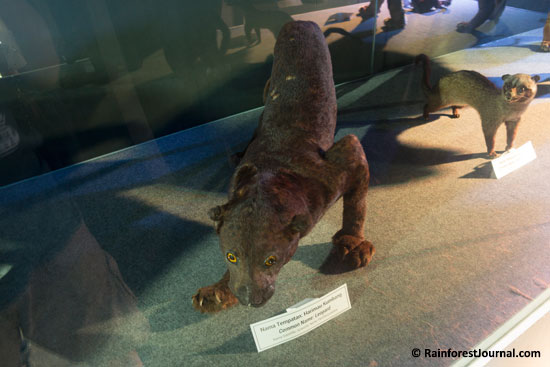 The leopards found in Peninsular Malaysia are all classified as the Indochinese Leopard, but the Malaysian ones are mostly all of the dark, melanistic form (black panther). This phenomenon is unique in the world. Perhaps you can call them Malayan Leopards.

Malaysia has all along claimed to have 50-60% forest cover, and this claim goes back some 25-30 years ago as I recall. But it makes no sense that until today, Malaysia still has supposedly 55% forest cover. It is very likely that a sizable portion of that 55% claim is made up of plantations, be it oil palm, rubber, durian, or some other crop. And no, plantations cannot substitute for a virgin, tropical rainforest. So let’s not delude ourselves. 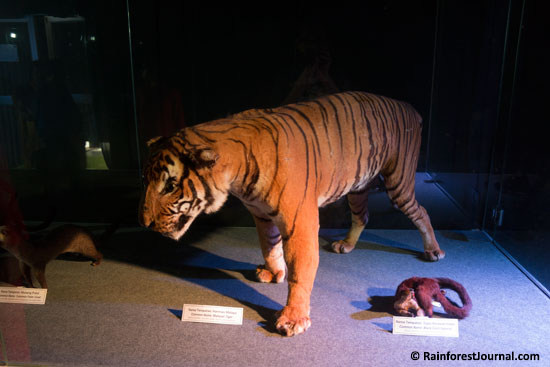 The Malayan Tiger is highly endangered and on the verge of extinction due to habitat loss and poaching. Will this national symbol of Malaysia disappear altogether in the next 10-15 years?

Even if not completely clear-cut for a plantation, our forests are logged for timber. Almost the entire forest estate of Malaysia today is made up of logged secondary forests with the only significant undisturbed areas being national parks or Protection Forest Reserves (water catchment forests on mountains) where there is less valuable timber to extract anyway.

Leaving the exhibition, the thought does cross the mind, will such exhibitions be the only thing left of Malaysia’s natural heritage in the coming future? Well, I can’t answer that one. Go visit the forests of Malaysia while they are still around. That sure beats any exhibition!

This site uses Akismet to reduce spam. Learn how your comment data is processed.

This website uses cookies to improve your experience while you navigate through the website. Out of these, the cookies that are categorized as necessary are stored on your browser as they are essential for the working of basic functionalities of the website. We also use third-party cookies that help us analyze and understand how you use this website. These cookies will be stored in your browser only with your consent. You also have the option to opt-out of these cookies. But opting out of some of these cookies may affect your browsing experience.
Necessary Always Enabled
Necessary cookies are absolutely essential for the website to function properly. This category only includes cookies that ensures basic functionalities and security features of the website. These cookies do not store any personal information.
Non-necessary
Any cookies that may not be particularly necessary for the website to function and is used specifically to collect user personal data via analytics, ads, other embedded contents are termed as non-necessary cookies. It is mandatory to procure user consent prior to running these cookies on your website.
SAVE & ACCEPT